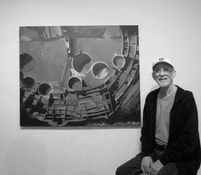 Harold Joiner grew up on the plains of eastern New Mexico in a house at the edge of town. He explored the prairie near his home with neighborhood friends, and he developed a deep appreciation for the natural world. Harold’s mother was a painter of the local genre, and he exhibited an interest in drawing and painting at an early age, taking his first oil painting class at age nine.

After graduation from Texas Tech, with a degree in architecture, Harold had a long professional career working on both domestic and international projects. He was instrumental in the design of numerous buildings and corporate interiors in Houston and other cities in Texas and the United States, as well as in cities abroad during a ten-year residence in Jeddah, Saudi Arabia. During his time abroad, Harold traveled extensively throughout the Middle East, Africa, the Indian Subcontinent, Southeast Asia, and Europe.

Since returning to Houston from Saudi Arabia in late 2001, Harold has studied painting, photography, and other media at the Glassell School of the Museum of Fine Arts Houston, at Art League Houston, and under private instructors. He has participated in numerous solo and group shows in the Houston area. His current focus is painting the landscape of the Texas Gulf Coast and the Texas Hill County.

See the artist's work in the store.