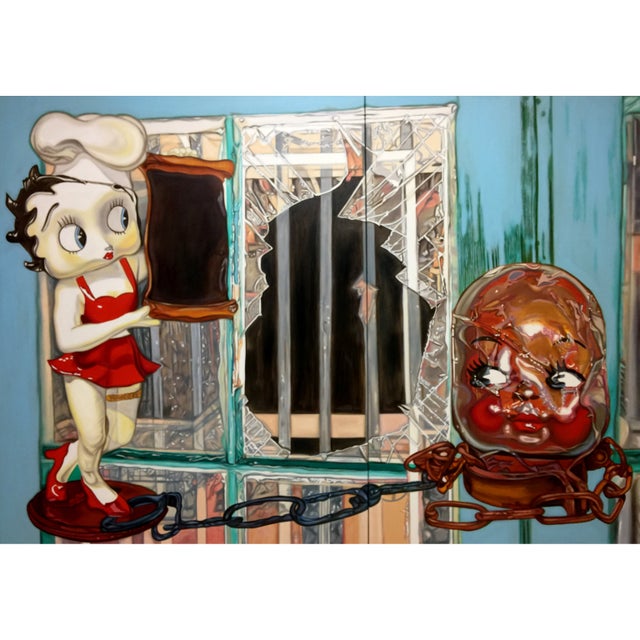 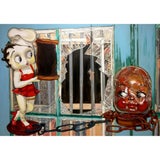 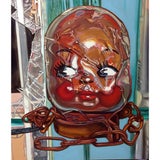 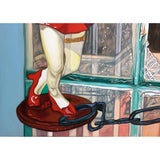 Collection of the Artist

The title of the painting references both a song recorded by James Brown, “It’s a Man’s Man’s Man’s World,” which in itself was a word play on a movie, the 1963 comedy film, “It’s a Mad, Mad, Mad, Mad World.” I had both the song and movie in mind when I titled the work; however, was not aware the song also used the movie as a reference. Rolling Stone magazine characterized the song’s lyrics as “biblically chauvinistic.” It reached No. 1 on the Billboard R&B chart in 1966.

I started this piece in 2015 and completed it in 2017. Symbolically, when I composed and began the work it was in more of a historical context regarding slavery as well as the general ownership and subjugation of all women in general. Betty Boop represents white women who, while privileged and, of course, not actual slaves, were also considered the property of men and had their human rights subjugated as well. Betty Boop is seen standing on a pedestal, an inference of how women have been viewed historically as lovers, wives, and mothers. In addition, she is also highly sexualized…the red clothing, heels, body, facial features. She is depicted from a male viewpoint of females, (the ‘male gaze’) and not one of individuality or personhood in her own right. Conversely, while the white woman had her own constraints and lack of legal rights, she also benefited from and was therefore willingly or unwillingly complicit in the historical context of slavery and treatment of people of color.

Both of these females are trapped in their own unique oppression, yet they are connected by it and their womanhood. Their eyes are both wide and looking at each other. The white woman is trapped in her hyper-sexualized life ruled by patriarchy, yet she has one foot on the heavy chain that links her to her sister of color, thus representing the ties that bind. The black woman is quite literally trapped in slavery with a heavy bolted shackle at her neck. She is not even seen as a full human; such is the extent of her brutal exploitation.

In 2016 during the time I was painting it, racial tensions, killings of African Americans, protests, civil unrest, and police brutality across the country were erupting. It was then that I thought about the madness going on and recalled the movie from my childhood. Suddenly, current events merged with historical ones and blended in the painting as it progressed.

In 2017, upon completion, the painting absorbed a further layer of meaning from the daily reports of men of respect, power, and financial privilege sexually abusing, assaulting, and even raping women in all industries and levels of society. This piece also embodies sisterhood and unification for women of all colors and backgrounds against men who abuse, rape, and sexually assault them. This was the peak of the #MeToo movement.

June 2020. A picture is worth a thousand words… A painting is a living entity which both absorbs and reflects the thoughts and energy of not only the artist but of the viewer as well. This painting has recrudesced to my original intent about historical white privilege, racial inequality, and slavery and now dovetailed with the current zeitgeist to finally recognize and end institutional racism. I hope 2020 is the last time I will need to apprise the multidimensional meaning of this painting because change will have come at last. #BlackLivesMatter.

Sold out
Add to Cart