MASKS ARE RECOMMENDED AT ALL MUSIC EVENTS
OCTOBER

Sunday, October 23, 6pm Aurora Trio
Part of their 2022-23 season, the Trio will be performing folk music from around the world.
NOVEMBER

Tuesday, November 15, 7pm Clarinetist Poppy Beddoe
Poppy will be playing a transcription of Bach's Chaconne, works by Houston composers as well as a homage to Manuel de Falla, some Gershwin fantasy pieces and some other unaccompanied Bach.

In demand as a soloist and a chamber musician, Poppy performs extensively throughout the UK and internationally. Her debut album, Soliloquy, was released by Ulysses Arts in December 2021, including several of her own arrangements of Bach and of Hildegard of Bingen. The album has been very well received, featured by Apple Music consistently since release. Poppy is looking forward to recording a concerto written for her by Matthew Taylor with the BBC National Orchestra of Wales in December 2022. In November 2022, she has been invited by the University of Houston, Texas to give a series of solo recitals, where she will première several pieces written for her. She will be the Artist in Residence of the Clifton International Music Festival in summer 2022, culminating in the Mozart Concerto in Clifton Cathedral. This year also she will also make her King’s Place debut and she is looking forward to playing with the Assembly Project at the St. Magnus International Festival in June. She has regular engagements in the South of France, notably at Conques and Marcilhac Abbeys.

Poppy is the Artistic Director of the Berkshire Chamber Music Festival and a teacher at the Royal Academy of Music Junior Department. She graduated in Music from King's College London in 2014, followed by a Masters at the Royal Academy of Music in 2016. She is very grateful for the support of the Talent Unlimited Charity, the Malcolm Arnold Trust and the Nicholas Boas Foundation.

Monday, December 5, 7:30pm, WindSync Wonderland
Houston’s wind quintet WindSync returns to Archway Gallery in this cozy concert event. WindSync Wonderland will feature music written for winter and the winter holidays, curated from the 16th century to the present day. In a nod to Houston’s mild Decembers, the musicians have selected music representing warmer climes and outdoor scenes, from the “snow fairy” insects of Japan to the tango clubs of Argentina.

​All ticket levels include a post-concert festive cider and cookies reception with WindSync!

Sunday, February 19, 6:00-8:00pm, Carya String Quartet
The windy months of spring will be introduced in February with a collaborative program celebrating the power of breath. Featuring flutist Sergio Pallottelli and mezzo Megan Berti, the program includes  Respighi’s “Il Tramonto,” translated as “The Sunset,” and Late-Romantic American composer Amy Beach’s set of Variations for Flute and String Quartet. This program will conclude with the Houston premiere of local composer Stephen Bachicha’s song cycle “Close Your Eyes,” for mezzo and string quartet. 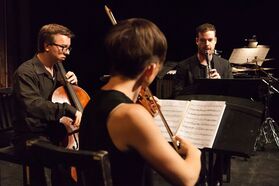