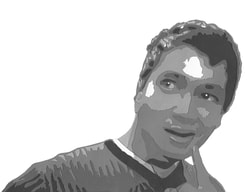 Anthony Pabillano is an artist who predominantly focuses on rendering portraits using layers of paper. Anthony's fascination on the human form has led to his exploring various aspects of the human condition and experience through his portraiture work: from ideas relating to self and identity, to topics about diversity. His pervasive artistic pursuit is to visually celebrate the diversity and the individual stories of the people he meets whose walks of life all led to the multiculturally-, multinationally-, and multi-ethnically-rich city of Houston, Texas—the place he now calls home.

Regarding his medium of choice, Anthony’s love of paper began in high school with a Henri Matisse-inspired cut-out assignment and when he used wallpaper scraps to create a replica of Madonna and child. These two undertakings—cutting blocks of paper in organic and geometric forms per the Matisse project, and cutting into paper to convey the contour lines of the Madonna-and-child image—form the foundation of the style of paper art he developed back in 2010. His method of conveying the three-dimensionality of form involves cutting blocks of paper and layering them, with the layers of paper in gradations of color that are in turn cut in such a way that follow the contours of the different values on the form.

Starting in early 2019, Anthony began experimenting different manners through which he could further explore forms through paper. This endeavor not only expands the breadth of his skills with the medium, but also catapults him into a path of self-discovery—a journey that advances his aim of seamlessly integrating the human narrative through forms of paper.

See more of the artist's work in the store.